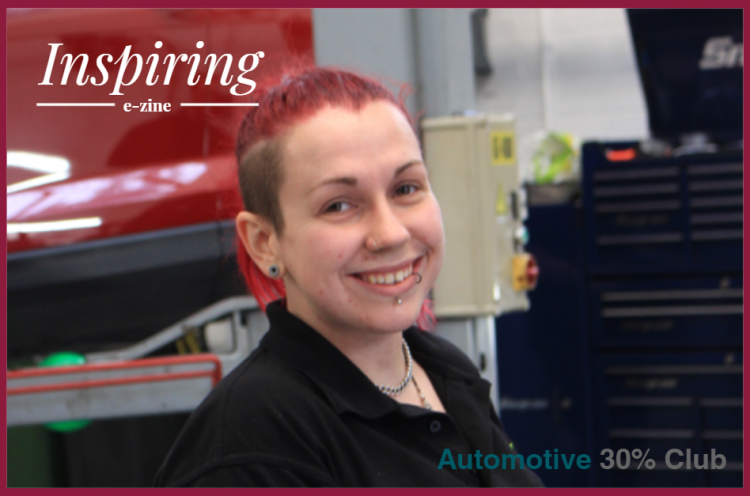 A female vehicle technician has kick-started her career through an Autotech Academy internship.

Sophie Hemming candidly admits that securing a vehicle technician role was frequently challenging in male-dominated garages. So much so that, despite a life-long love of motor cars, the 26-year-old put off taking her Level 3 in Light Vehicle Maintenance and Repair for several years.

After completing ‘A’ Levels at Pembrokeshire College, in 2015, Sophie qualified with a Level 1 in Light Vehicle and Maintenance Repair and a Level 2 qualification in Motor Sports: “I have a passion for race cars and from a young age would help my dad fix up a long line of old vehicles. I knew early on that it was the career path for me.”

Moving to Southampton, Sophie was disillusioned with repeated rejections when trying to secure a vehicle technician role; “I was either under qualified with a Level 2 or was frankly told that as a woman I wouldn’t fit in,” so she found a role as a seamstress.

Being furloughed during the pandemic, Sophie quickly realised that her ambition to work within the automotive industry had not been quashed.

Signing up for a Level 3 at Eastleigh College, Sophie was also employed by the college as a Learning Support Assistant, teaching Level 1 and 2 automotive students. Teaching could have potentially been the default career for Sophie, had her course leader not mentioned the Autotech Academy internship programme.

Created to help thousands of students get a foothold on the automotive career ladder, and support employers when recruiting new talent, Autotech Academy provides qualified college leavers with a gateway into the industry through a paid internship.

“Autotech Academy have been amazing. They took all the hard work out of the job seeking process, from finding a placement, providing me with tools and a uniform, and making the introductions. I just had to prove myself.”

Starting at Richmond ŠKODA, Botley, in early September, Sophie readily admits that she has, ‘landed on my feet.’ Working with the team, Sophie has put her theory to good practice, spending two days in her first two weeks shadowing each vehicle technician. At the start of the third week, she spent the morning working with the Master Technician who, after assessing her ability, gave Sophie her own ramp in the afternoon.

“Since then, I have been working independently. The team here are great. I am continually given new tasks and am encouraged to ask questions if unsure. As a dealer garage, the work is timed, so it’s a fast way to learn to work efficiently and with confidence.”

Sophie’s Service Manager, Matt Savage, commented: “At Richmond we only want people with a can-do approach, and Sophie has demonstrated that with her commitment to succeed in a challenging industry. She has settled in well working within a great team and we know that our investment with Sophie through Autotech Academy will support our business moving forward. It is important that we encourage and support Sophie to continue her development and prove that success is about attitude and not anything else.”

Group Aftersales Manager Ross Alesbury also added: “It’s always great to see new people coming into the industry, and success stories like Sophie’s are a demonstration that the industry can be inclusive, albeit there is a huge challenge to change perceptions. However here at Richmond Motor Group we want to fully support people who are willing to learn and develop their skills to have a long and enjoyable career with us.”

Sophie concludes: “I am delighted to finally be in this position. At college I was considerably outnumbered, and there were only three other women on all of the automotive courses I took combined. However, the opportunities for women, even in the few years since I completed my Level 2 course, seem to have increased within the industry, and I would encourage any other woman, with a passion for motor vehicles or engineering, to follow her ambition.”

“Sophie’s story is indicative of the gender imbalance within the automotive industry,” comments Gavin White, CEO of Autotech Group. “A key objective when we launched Autotech Academy was to make a difference and help close this gap. Sophie’s achievement is testament to this as the Academy team have been instrumental in helping her make the transition from education to employment, and we hope she will be the first of many women to join the initiative.”

“Sophie’s story is quite typical of young women trying to establish careers as automotive technicians. Instead of following the traditional apprentice route Sophie chose to do her course at college, a pathway that is encouraged by schools and parents because they see it as a familiar and safe environment for girls to gain vocational qualifications that is populated by other youngsters rather than older men, and they feel it is like an extension of school rather than taking the leap into employment.

However, many automotive employers prefer to hire apprentices, and there are still some out there who, due to their own prejudices and narrow experiences, simply do not think that women can be successful in the workshop. The sector is therefore failing to access this female skills pipeline, and the part qualified female technicians leave to do something else, which is a huge lost opportunity in an era of technical skills deficits and a shrinking qualified technician population that has been caused by a reluctance to retrain to work on EVs, the “great resignation” phenomenon taking hold as people re-evaluate their work life balance, and the loss of a full nationwide apprentice cohort due to the pandemic.

A bridge must be built to nurture the supply of female talent at colleges and link it to the employers with a demand for technicians. The Autotech Academy is a great solution to fast track these capable young women into substantive roles in inclusive companies in which they will thrive. Everybody wins.”