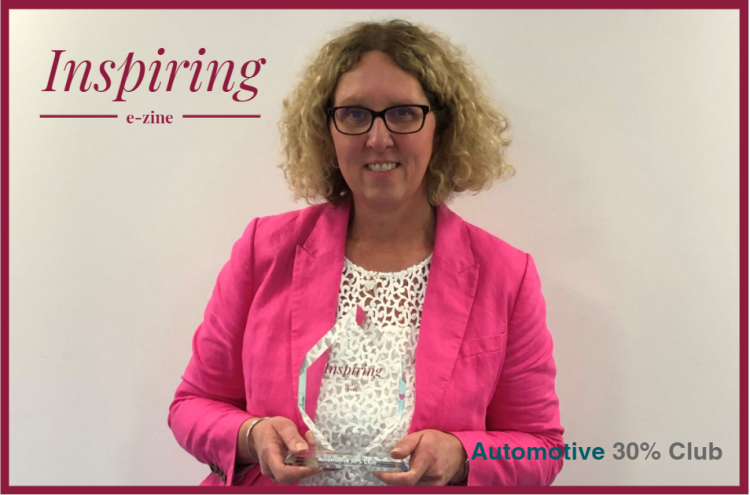 We were delighted to announce Angela Shepherd, CEO of Mercedes-Benz Retail Group as our Inclusive Leader of the Year at our Inspiring Automotive Women Awards back in October.

In this feature below, you’ll see more about why Angela was so worthy of this award, and why Angela’s team were inspired by her actions.

Angela was described by her nominator as a breath of fresh air, who is hugely passionate about creating an organisation that has a winning and people-orientated culture at its core. She was recognised as
Inclusive Leader of the Year for her commitment to driving an inclusive culture throughout Mercedes-Benz Retail Group, and for being personally involved in supporting the Automotive 30% Club’s activities.

Since becoming CEO 2 years ago, Angela’s Senior Leadership team has been inspired to champion the company values, and include cultural initiatives that highlight diversity and inclusion, gender equality, and many more. Changing the culture for any organisation takes time, but Mercedes Benz Retail Group is already encouraging many female colleagues to speak up and openly show interest in their career progression.

Back in 2019, Angela joined the Automotive 30% Club and the entire Senior Leadership Team at Mercedes-Benz Retail Group joined the Club’s two day ‘Change The Game’ conference, which helped to provide great insight for particularly male directors and resulted in their spin-off ‘The Female Lead Initiative’. This is a working group for women and men to discuss how they can achieve higher gender balance in management positions as well as on a general level, and also embraces uncomfortable conversations about harassment and other topics that for too long have not been discussed.

Angela’s nominator added: “Angela has not only given the company the focus on gender balance but also has been a shining example of a female leader empowering people to make their own decisions. I consider myself blessed to be working with her.”

Angela adds: “I feel very honoured to have received the Inclusive Leader of the Year Award. At first, I was shocked because I couldn’t work out how my name was on the list. We had a number of nominations within Mercedes-Benz Retail Group and I knew the names of those nominees. My team later confessed that they’d put in the nomination on my behalf, and I’m really grateful for them doing that. I feel very lucky to have their support and I really hope that it’s a vote of confidence that we’re starting to move things forward in the business.”

On behalf of the Automotive 30% Club, we want to thank Angela for making such an incredible contribution to the automotive sector and highlighting inclusion in all her actions.