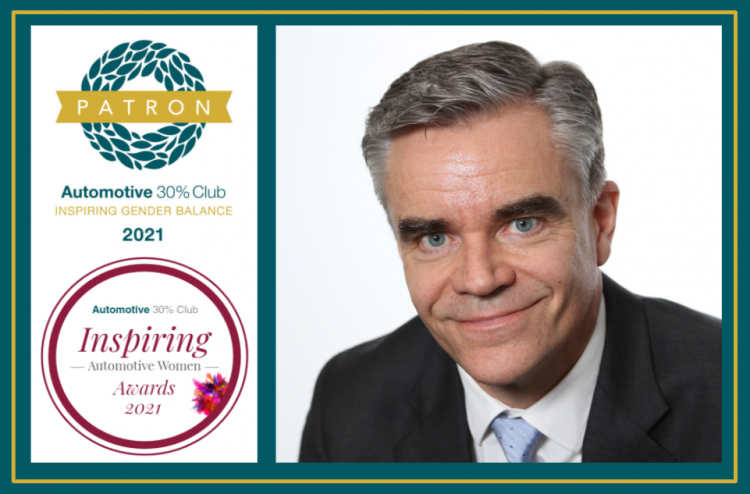 “My wife and I met in the car industry. She started on the manufacturer’s side and ended up on the retail side, and that had challenges along the way. So that’s given me a close insight into what it used to be like for females in our world.”

Neil thinks it’s time for the industry to stop making excuses about the lack of gender balance: “We’ve spent ages in this industry saying it’s all too hard, and women have children and boys like cars. All that sort of rubbish.”

He supports the Automotive 30% Club initiative because he believes that 30% of any minority becomes significant because it gets a voice. As he remarks: “If it’s one out of 10 or two out of 10, even if you’re brilliant and effective and amazing, you’re just not heard. Because there are not enough people like you. But once you get 30% and above, then you’re heard.”

Initially, Neil thought the company’s approach to increase diversification might get pushback from the predominantly male industry, but he believes the mentor relationships stopped that from happening. “Line managers and senior managers understand it makes a better business,” he says. “Most of the senior team are middle-age men who are now getting insights into how it feels to try to make your way as a female in a male-dominated industry. It helps them understand and empathise with their team.”

Jardine Motors now has 30% of women in middle management; it was single figures two or three years ago. Neil comments on trying to raise aspirations and give women more confidence they can do the job: “There’s a classic situation where there are 10 things on a job spec and a guy will be able to do six and think they can do the job; a woman will be able to do nine and still think ‘I can’t do 10, I’d best not apply’. It’s really embedded.

“We respond that if you can do even six out of 10, don’t worry, we can easily do the others in time. And whatever your family situation is, we’ll find a way around it.”
Neil says the company is trying to create a culture where such success is more than possible: “The senior people want it to happen. It’s been successful at the departmental level and, over time, that will lead us to more senior leaders, and maybe board members.”

Comments on positive discrimination, Neil says that if there’s a shortlist of candidates with a similar ability or different abilities, different strengths, they tend to favour a female. He adds: “I’m not saying we’re ignoring our guys. Please don’t misunderstand me. But I think it’s been the opposite for decades, where guys had all the help and assistance and got all the breaks. So I don’t feel at all odd about giving some of the breaks the other way. That doesn’t feel controversial to me. And it almost always works once they’re in the role with the support – maybe they do it differently, but they do it equally well, if not better.”

In addition to mentoring, the company also supports the Speaker for Schools programme.

“I was properly scared for the first ones,” Neil admits. “It’s quite difficult. It’s not what I do. I don’t speak to kids. They have no respect for some grown-up bloke who turns up in a suit. Why should they listen to me? It’s real grassroots stuff, talking to mostly teenage girls in difficult schools, comprehensives in urban areas.”

While getting that initial connection was difficult, he found a solution: “You ask them what their parents or carers do. And they give you answers. And then you say, ‘Do you think they chose that career?’ And some of them reflect and answer ‘Probably not, they just ended up in that career’. And occasionally you see lights going on with the more ambitious ones who think ‘Well, yeah, maybe this bloke’s got something here. If I work a bit harder, make the right choices, seek the right help, coaching, and mentoring, maybe I can have a job I actually want, rather than a job that just barely pays the bills’.”
Neil adds: “And you can talk about car brands because there’s a perception they go with a lifestyle these kids aspire to.”

Neil recalls a time early in his career when he was also influenced by a senior professional. “Chris White had the ability to talk to all of us in the team. She was coaching and collaborating, getting the best out of us – although I wouldn’t have been able to characterise it then. But it was different from the more ‘shouty’ type management techniques. I don’t think I realised that it was a male or a female because it didn’t seem relevant at the time. But looking back on it, she must’ve been in a very male-dominated area, and she was using a non-machismo management style. And I just took that in and thought that’s a great way of doing things; I still use some of the things she used. At the time, I wouldn’t have been able to say ‘Gosh, this person’s shining a light and she’s a huge mentor’, but the things she was doing, and therefore teaching me, were excellent. I was lucky to have that.”

And, there’s another reason: “It’s also correcting a wrong,” he says. “We simply can’t be a gender-balanced industry if we’ve got 90% blokes and 10% females in senior roles. Whichever way you try and excuse it, we’ve been doing something wrong for decades. So I’m probably 70% it’s a great business thing to do, and 30% it’s just the right thing to do.”