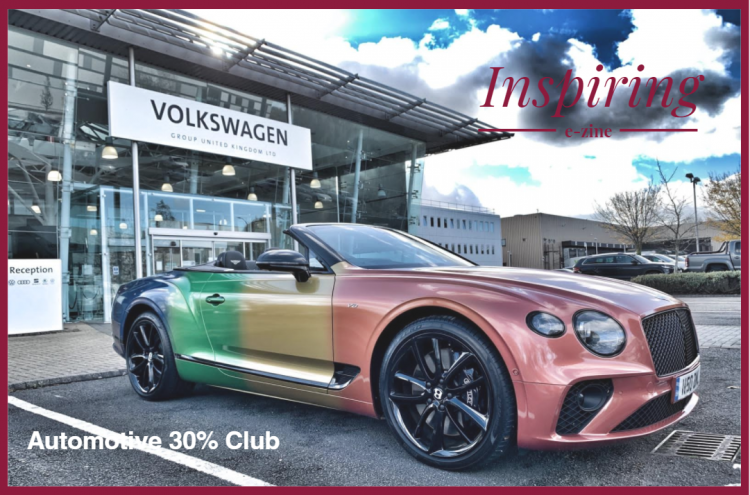 We recently had the pleasure of catching up with Maxine Bonwick – HRBP and Diversity Lead at Volkswagen Group UK and member of the Automotive 30% Club’s Ideas Circle who told us more about the networks in place at Volkswagen Group UK, which help to make VWG an inclusive environment and employer for all.

Driven Women is an advice network which encourages support, networking and enables equal hiring practices. It develops informative educational sessions at the request of the group e.g. networking. It feeds back to the business on where to improve or what to consider and supports gender equality at all levels.

The Cultural Diversity ENG – celebrates the uniqueness and difference of colleagues in a diverse workplace. The group engages in awareness and education-building activities, with around six planned every year. Guest speakers, reverse mentoring, informative recommended reading lists and other events support the group’s vision “to create a workplace that celebrates and embraces the uniqueness of our colleagues.”

LGBTQ+ and Friends aims to provide a safe, confidential space for LGBTQ+ colleagues, and colleagues from outside of this community who wish to support. Members are able to share experiences and advice, while helping to raise awareness of LGBTQ+ issues, and attract and network with LGBTQ+ employees from other companies.

Jimi Beckwith – Press Officer, Volkswagen Passenger Cars, and LGBTQ+ and Friends ENG Chair shares what his involvement with the group is, and what their aims are

In addition to the environment provided by the LGBTQ+ and Friends group meetings, the ENG recently launched a 1:1 Support programme, to benefit colleagues with LGBTQ+ related issues who may not necessarily wish to, or have the confidence to, come to the meetings. This support stretches the length and breadth of LGBTQ+ issues – from someone struggling to come out to their family, to someone who simply wants to know more, but is afraid to speak up.

Events and awareness building have been a challenge during 2020, given the situation with COVID-19. Volkswagen Group UK were due to take part in their first-ever Pride event, which has since been pushed into 2021, however, the team is regrouping ready to revitalise and step up the plans and create a Pride that will put all eyes on Volkswagen Group as an inclusive employer.

Jimi’s reasons for being involved

As the Chair of the LGBTQ+ and Friends Employee Network Group, it’s safe to say I find being a member of the group personally satisfying. Coming from a background where a family member was abusive due to my sexuality, I strive to change the society we live in to ensure it does not happen to anyone else. The ENG benefits both those who choose to be a part of the group, as well as those who are not. It endeavours to alter perceptions and attitudes of those around the business who aren’t LGBTQ+, nor part of the group.

Volkswagen Group is an inclusive employer – the Volkswagen name means ‘People’s Car’ and is based around mass inclusivity – so it’s not so much perception that we’re looking to change, but to raise awareness. There are so many reasons to get involved in an LGBTQ+ and Friends network, the most obvious being to learn about a different type of person – broadening cultural horizons and understanding a group you might not know much about. LGBTQ+ is a sensitive area, with some feeling like they can’t openly live their most authentic lives, so being supportive and understanding in this way could make you someone’s port in a personal storm that they wouldn’t have otherwise seen any way out of.

Being Chair of an Employee Network Group difficult conversations are almost inevitable. Just because a group of people share the same community, does not mean they share the same opinions. Being a stakeholder in what can be a divisive topic also leads to some less-than-comfortable discussions, and often proving less progressive or open-minded voices wrong in a positive way is more effective than calling them out or confronting them.

With a smaller attendance than the other ENGs at Volkswagen Group, our aims and ambitions are a little softer than those of the other groups – namely, maintaining a supportive environment and continuing to raise awareness of the group and LGBTQ+ issues. This raising of awareness helps to keep fresh faces joining the group. A recent project of placing a rainbow-wrapped Bentley prominently in the main reception area of Volkswagen Group UK’s HQ was a big awareness-builder, for example. Furthermore, innovative solutions like collaborative meetings with other LGBTQ+ ENGs in other organisations are also in development.

Despite only being in my first six months at Volkswagen, I have been afforded many opportunities to get involved in various different ‘people-focussed’ groups including undertaking my Mental Health First Aider qualification and being a part of both the Engagement Team and Team Inspire. I wanted to be a part of LGBTQ+ and Friends because I saw it as an opportunity to have a positive impact on people within a company that has already done so much for me.

Of course, this experience has not been a typical one. I came into this group during the pandemic, which means my time here has been largely different to that of previous years. Unfortunately, this means I cannot regale you with bountiful anecdotes, but what I can tell you is this:

I didn’t come out to anybody until I was nearly twenty-two years old. It took me over ten years to feel like I was in a safe place, with somebody I could trust to share my feelings. I am fierce in my objective to make sure nobody else feels this way and I think active involvement in this group is a great place to start.

I could talk all day about how this enhances Volkswagen’s image as a diverse, progressive company, but ultimately the real value of LGBTQ+ and Friends is that it creates a fun, safe environment in which we can share and learn, that truly thrives on inclusivity and acceptance. I am not only proud to be a part of this community, but I am proud to work for a company who allows me to feel visible not just without fear, but with strength.

We’d love to hear any stories surrounding inclusion within your organisations. Perhaps you have an LGBTQ+, Disability, Diversity or Women’s Network which each aim to make change throughout your company. We’re interested in knowing how these networks help to benefit employees, or how they would benefit if not already implemented?

Share your thoughts with us on social media or get in touch with nicola@automotive30club.co.uk to join our Automotive 30% Club Inspiring Super Network today.