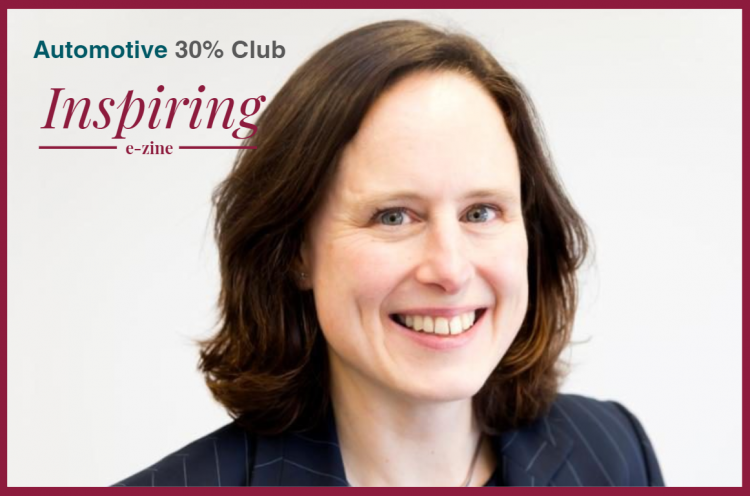 Roz Bird is the Commercial Director at MEPC Silverstone Park, a position she has held for the past seven years. In 2017 Roz was confirmed as one of Grant Thornton’s 100 “Faces of a Vibrant Economy” and in 2018 she was elected as Chair of the Silverstone Technology Cluster Board.

We are excited to have had the opportunity to speak to Roz and ask her questions on a host of issues including her honest thoughts on the personal challenges she has faced being an LGBT+ woman in a senior position, the importance of MEPC Silverstone Park being a partner of the Automotive 30% Club Inspiration for Innovation Network, being invited to be a judge for the Inspiring Automotive Women Awards 2020, and much more.

As a youngster, what were your dreams and aspirations?

I always had to put in extra effort at school to achieve anything in terms of qualifications. That was hard sometimes when friends found it easier and got better grades. It taught me to be determined and not be scared to fail. I am proud of what I have achieved and of everything I have learnt. The work ethic that I developed doing my GCSEs, A-Levels and my degree I’ve carried through into my working life and in gaining professional qualifications. I didn’t really know what I wanted to do when I was young, but I was always a good communicator and had confidence. I liked talking, singing in the choir and leading expeditions for the Duke of Edinburgh Awards. So I knew I had the potential to lead and take responsibility.

What was your career pathway to becoming the Commercial Director of MEPC Silverstone Park?

I did think about joining the Armed Forces but, at the time, gay and lesbian people were not allowed to join. I am quite an open person so I didn’t want to, as I saw it then, ‘live a lie’. I was still enjoying studying so did a degree in European Studies and then a Masters in European Politics.

In the first ten or so years of my working life I ended up in project management roles for charities in the public sector. Working in Sheffield, I wrote a bid for funding for a project engaging the local community in a science park that was going to be built: the North East Technology Park in County Durham. That’s when I realised science parks can make a significant contribution to the economy in an area, creating employment in new sectors. Also, I can recall, as I was growing up, going into Cambridge, with my parents, at the weekend and seeing Cambridge Science Park being built. That was when I realised that there were opportunities out there beyond farming, Cambridge University and unemployment.

I worked as business development manager for UKSPA (UK Science Parks Association). After five years, I joined MEPC, at Granta Park, who encouraged me to do surveying qualifications (I already had marketing qualifications). I’ve now been at MEPC for 13 years; becoming Commercial Director at Silverstone Park seven years ago, and have really enjoyed developing the park from just a few businesses on site, to what is now fast becoming a significant advanced engineering business community.

As an LGBT+ woman in a senior position, what personal challenges have you been faced with in terms of people’s attitudes and opinions, and how have you overcome them?

I couldn’t choose certain career paths, such as the Armed Forces, because I am a lesbian. I think that being a lesbian, in society and/or at work, especially when meeting people for the first time, means you have to be brave and cover off the issue with people, early on, to avoid the other person feeling embarrassed when they make assumptions about your life. In the early days, when I did not manage this well, it led to more awkward conversations later down the line.

It was also hard in social situations related to work where I had a different lifestyle and found I could not join in with general chat. I don’t think that this is uncommon for women in male-dominated work environments. If you don’t play football, golf or rugby or support a team, and if you don’t have children then those situations can be hard. I always say I may well have liked those sports but when I was at school I wasn’t allowed to do them.

I try to champion the use of the word ‘lesbian’ because I’ve noticed that, for some reason, the word is not used comfortably by society. For some reason ‘gay’ is ok and ‘lesbian’ not so much. I’ve had feedback from people in audiences, when I have used the word and talked opening, that it’s been really helpful to them to have someone talk openly. I think what is most important in life is that everyone should be allowed to be their authentic self: real, human. It’s what people appreciate, want to see and can connect with.

You were recently on the judging panel for the second year running for the IAW Awards. How did you feel to be asked to judge these awards, and why was it important for you to take part? How did it feel hearing about so many women who were an inspiration to others?

I appreciate being asked, by Julia Muir, to be a judge. I really enjoy reading all the inspiring entries; it’s really heart-warming and encouraging to hear so many stories of people championing issues and thinking how to help other people to be the best they can be. There’s such a range of different stories, from older/experienced/senior to younger, pro-active women who are going all out/above and beyond their job to make a difference to the workplace for themselves and other people. It’s quite hard to pick the winners to be honest because they are all doing a great job; it’s great their colleagues support them by submitting entries.

Talking to companies at Silverstone Park, it’s clear the skills agenda is top of their list of concerns. Companies are worried that young people don’t know what jobs are available, and obviously, they want to create a talent pipeline. Working with the Automotive 30% Club, it’s been great to get involved in developing the relationships between the local schools and the Silverstone Park businesses – talking to students about the world of work and the skills that businesses are looking for.

We get a lot of great feedback from the young people involved in the programme. It’s really important that they receive the information they need to understand the opportunities and what it takes to get there. Our businesses are clear – the right attitude is the most important thing. We explain to the students that doing their best, being conscientious and being a good friend (and therefore a good colleague) is more important than top marks.

As with the automotive industry, the technology and engineering sectors also struggle to attract women. How does being involved in the Inspiration for Innovation Network help in educating female students to understand the careers available, skills required and the variety of opportunities working within these sectors?

Working with Julia Muir and the Automotive 30% Club has helped me and the business community I represent communicate with all young people about the career opportunities in the local area. I’m really keen to champion gender equality in the workplace. Some people say there is an environmental emergency; I think there’s a gender equality emergency!

Gender equality in the workplace will help to solve the skills gap in all industries.  Surely, whatever industry you are in, you want to attract all the best young people and all the best people that will need to retrain and change careers as a result of the pandemic and Brexit and future big changes in society.

If you want all the best people then the stats say that 51% of the population is female, so unless, as a business, you have 51% female representation then you have barriers preventing the best women joining your industry. I am working with the STC and with the construction industry to try to identify those barriers, open up the jobs market to women and help solve the skills gap in the engineering and construction industries.

“With the Silverstone Technology Cluster’s Gender Equality & Diversity Committee and Silverstone Park’s own Women Into Construction group, we’re championing the idea that businesses need to be ‘fit for purpose’ to attract all kinds of people into their industry in the 21st century, and be current with society or become obsolete.

They need to look at their practices, the way they conduct and present themselves and their people, and what might be putting people off working for them. I4I is a good way of getting business people to look across assembly halls and realise that it’s 50% girls and 50% boys, and many have a good work ethic and attitude, so why don’t you want to attract all of them?