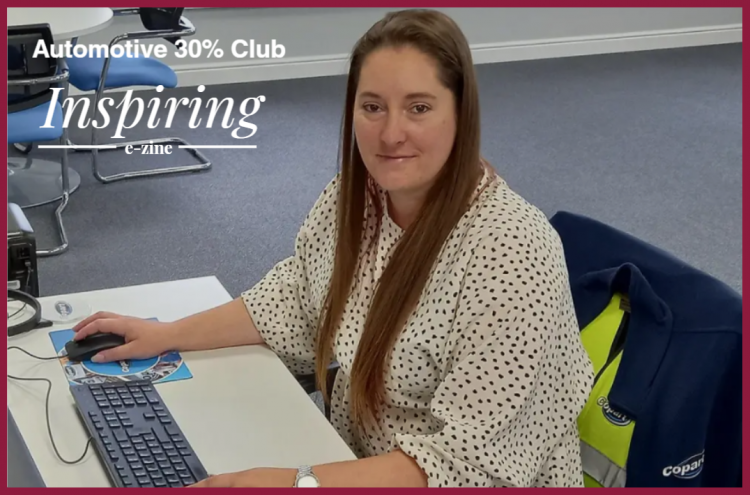 In the interview below, Rachel explains what it’s like to be a female engineer in a predominately male environment and highlights why International Women in Engineering Day and similar awareness campaigns are so important.

“Rachael’s career with Copart began over five years ago when she joined our business as a Claims Settlement Advisor. She moved into an administrative role within the Vehicle Engineering team, before pursuing a career as a Vehicle Image Engineer.

Over a three-year period as a Trainee Vehicle Engineer, she became AQP qualified, trained on the safe handling of hybrid & electric vehicles, and achieved an IMI Level 2 Diploma in Vehicle Maintenance & Repair.

Now a fully-fledged Vehicle Image Engineer with Copart, Rachael’s IMI Vehicle Damage Assessor (VDA) qualification has given her the skills, knowledge, and techniques required to determine vehicle damage following an accident and to identify the costs involved to safely repair and return the vehicle to its pre-accident condition.

We spoke to Rachael on International Women’s Day back in March 2021, when the country was in step 1 of the roadmap out of lockdown. A few months on, with the last remaining restrictions about to be eased, UK roads – and Copart’s engineering team – are as busy as they ever were pre-pandemic.

What have you been up to over the last few months?

Now that the last remaining covid restrictions are easing, there have been reports in the news that road traffic has now risen above pre-pandemic levels for the first time. As a business, we are certainly seeing the effects of this and the volume of accident-damaged vehicles coming through Copart have increased. I’m certainly being kept very busy!

What’s it like being a female engineer in a predominantly male environment?

Being part of the engineering team at Copart has been a great experience so far.

I have never experienced any kind of discrimination or prejudice, despite engineering being a typically male dominated industry. I’ve always just felt like, and been treated like, part of the team.

Having said that, I do appreciate what an achievement it is to be a female engineer and I feel proud that I could be perceived as a role model for other women who may be interested in pursuing a career in engineering, but for some reason may feel there are barriers.

What further training will you be doing in the future?

I’ll need to be assessed for VDA re-accreditation every three years and will undergo refresher AQP training when necessary.

The rise of electric and hybrid cars is a huge topic right now, and with the petrol/diesel ban due to come into force in 2030, I’m sure we are going to start seeing a steady increase in EVs coming through Copart’s engineering and claims process over the next few years.

Although I have already been trained on the safe handling of hybrid and electric vehicles, further training for the team will be ongoing as the technology used in these types of vehicles keep evolving and advancing.

It’s going to be vital that Copart engineers are always up to speed on the latest developments and keep increasing their knowledge in this area.

Why are awareness campaigns like International Women in Engineering Day important?

I think it’s really important to show women that there are opportunities out there for them to pursue career paths in industries that they may not have considered before.

Some people already have the perception that engineering is for men. But there is no such thing anymore as jobs for men and jobs for women. There is no reason why a woman could not do any role here at Copart, for example we have female Drivers and Yard Operatives.

What would your advice be to women who are thinking about a career in engineering?

I’d say go for it! If you are already working in a company that has an engineering function, speak to your manager or HR department, and let them know you are interested.

When I was working in an admin role at Copart, I spoke to my manager and expressed my interest in an engineering role, which led to me being offered a Trainee Vehicle Engineer position. Even if you are currently working in a non-engineering role, you’ll have plenty of overall knowledge and insight about your company, which will all be of value.

I’m really glad that I have a good working relationship with my managers, which enabled me to move forward and feel supported in my development towards becoming an engineer.

It’s a very interesting role and I am looking forward to developing my skills and knowledge further in this ever-changing and fast-paced industry!”

“At Copart, we have a culture that welcomes equality and diversity, and we actively encourage the personal development of our teammates as an integral part of our Copart Cares CSR strategy. Of course, all roles at Copart are open to everyone, as we are fully committed to ensuring a diverse, representative, and progressive workforce.

Rachael is a valuable member of our Engineering team, and we are proud of what she has achieved so far. International Women In Engineering Day is the perfect opportunity for us to highlight Rachael’s story and I hope that it inspires other women to consider engineering careers.”