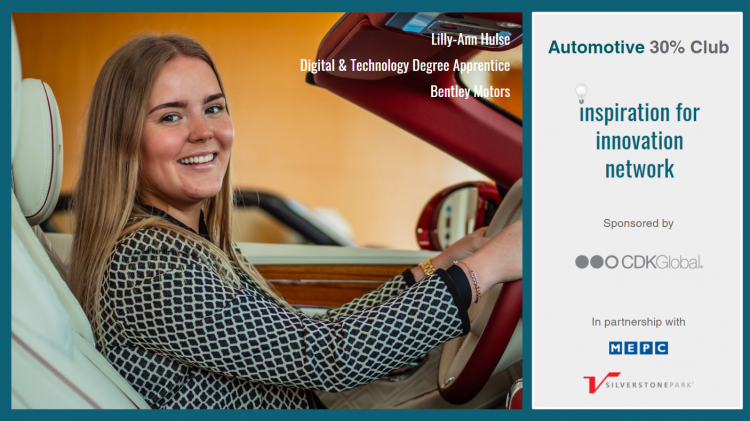 I’m joined on this article by Lilly-Ann Hulse, Digital and Technology Degree Apprentice at Bentley and our Inspiring Automotive Women Rising Star Award winner who, due to the outreach activities she has been involved in, is perfectly placed to share her insight on the importance of “real models”.

Our Inspiration for Innovation network of volunteers provide virtual visits to primary and secondary schools, to give the students face to face encounters with ‘real model’ experienced representatives from the world of work. These volunteers are diverse and have careers that span many different sectors, having followed a plethora of educational routes. The aim is to tackle gender stereotypes and career segregation at a young age and to ensure that young women, in particular, see automotive companies and related technology industries as employers of choice.

This means that we have a superb selection of career stories to share with students, and we hope students will be able to identify with and relate to the volunteers, and be inspired to aspire to  great things and realise that “they can be it because they can see it”. There is much evidence as to why this is the right thing to do for our next generation.

Research undertaken in the mid-’80s [1] involving children from a variety of racial and socioeconomic backgrounds found that introducing female scientists as role models in the classroom has a very positive impact on the attitudes of both male and female students with regards to women in science. Furthermore, ensuring the visit tied in with a topic on the curriculum was found to be important. The positive impact of using these female scientist role models was also expected to increase female enrolment in science courses in secondary education and encourage more girls to consider science related careers.

The Programme for International Student Assessment ( PISA) found in a 2019 study [2] that:

The interesting bottom line from this extensive study is that students may be influenced in their career choices by their understanding of their relative academic strengths as well as their confidence and interest in science. Unlike many high-performing boys, many high-performing girls may not pursue a career in science, even if they are capable of doing so, and that is because they are likely to be top of the class in non-science subjects too. This means that tackling boys’ underperformance in reading may be just as important to ensure greater representation of women in science careers as supporting girls’ performance in and attitudes toward STEM subjects.

I asked Lilly-Ann why she chose science at GCSE.

She comments, “In year 8 before I did my GCSE choices, I did IT, which everyone studies. I got sent to an open day at Barclays, Radbrook Hall, Knutsford – it was a STEM women event, and they advised that women in IT was a great choice. I was quite interested in it anyway, and  I enjoyed doing coding and using this little system called Scratch, a game that you could programme. So, there were about 30 in our class and I was the only girl, which actually did work out well for me because it meant that I got sent on all of the trips to everywhere because a lot of companies do want to encourage girls into STEM and Computer Science.  I also went on a coding day at Manchester University, and did a ‘Girls Aloud’ course run by Vodafone that was a week of learning how to do web development. It was interesting and obviously that looked really good on my CV.”

I asked, “Did you do any other science subjects?”

Lilly-Ann replied, “I did triple science. I like science because I like to understand why stuff works. I think I used to annoy my teacher a little bit because I was always asking ‘is this why this works like that?’ I need to understand why things happen to help me understand the end result and I think that’s why I enjoy science so much because it literally is why stuff happens. So, I did triple science and biology A level as well. They were women teachers actually, I don’t know if that influenced my decision, but my biology teacher was a really nice teacher who used to help me out. I could have chosen any of the sciences but I chose biology probably because of the teacher more than anything.”

I asked, “What would you say to other young girls who are at school who are considering what to do about your choice of Computer Science and how that has helped you?”

Lilly -Ann says, “For me, I made those choices because I thought, well why not, you have got 8 subject choices to make, so if you enjoy it, do it! That’s what I thought when I took computer science, and it’s worked out well for me because I’ve got a career in it and I really enjoy it and I want to do it in the future as well.”

This is good to hear from a relatable role model because our Inspiration for Innovation Network encourages youngsters to do something that they love, that is useful, and will also be future-proofed.

Lilly-Ann commented, “There are just so many jobs in digital, and people just aren’t aware that it’s not just coding; it includes activities such as project planning with stakeholders, which means that you get a wider experience than just the coding side of things.”

Lilly-Ann mentioned that she was perhaps influenced by her female teachers, so I asked her specifically, “When you were at school did you have employers coming in, or did you have any positive role models that you can remember?”

She says, “My computer science teacher was a man, and he was really positive about me going into computer science, he was always encouraging me to go out and do extra, and I did a bit of programming outside of school and I used to show him that. Also, my Girl Guides leader,  a woman called Clare Sawyer who works at Barclays Radbroke Hall which is the tech centre for Barclays, she was quite a big influence on me. Clare got me work experience with her for a week and that’s where I met the girls that do the cybersecurity degree apprenticeship at Manchester Metropolitan and I thought, oh I fancy this, I don’t have to pay for my degree and I can work. She was definitely one of the main people who encouraged me. She has a really established career at Barclays and is Global Head of Cloud Operation at Barclays which is massive.”

This is great to hear and really reinforces the message that girls need excellent male advocates and supporters as well as fantastic female role models, by having both there is a really rounded view for that young person of what they can achieve and a great balance provided by that support network.

Finally from me, “Do you have anything else you would like to add Lilly?”

Lily makes her final comments, “I think girls out there need to notice what’s available to them, once they do they will take the opportunities. A lot of people just presume that someone in tech is a  man who sits behind a computer screen all day in the dark writing code. I think that’s what I try to do, is raise awareness. As a person in tech,  I don’t do that in my every day at Bentley, I do a wide range of jobs. People that want to code for 24hrs a day can do that if they want to but there are many opportunities available, such as project management and leadership. My mum is a great role model for me too and always says that women have a different leadership style and therefore can be very effective and complementary to existing traditional male leaders too.”

The Automotive 30% Club Inspiration for Innovation Network, aims to show mixed ability, mixed-gender audiences the importance of being the best you can in all subjects. The really important bit though is that we bring our ‘real models’ into the classroom (albeit virtually at the moment) and this has a massive positive impact upon their perception of what is achievable. We do need continuous support from scientists and engineers to join our network so that we can carry this message for youngsters further into the future, so as a member of the Automotive 30% Club or as a tenant at Silverstone Park if you would like to become one of our ‘real models’ and join the I4I Network please email me at Danielle@automotive30club.co.uk.

Our activities have produced superb results over the last 2 years with feedback from students showing an engagement rate, where encounters have been recorded as meaningful standing at an average of 90% (even where interrupted in year 2 by restrictions due to the pandemic).