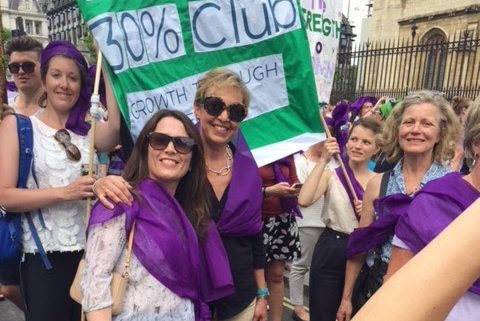 A woman’s democratic right to vote, and to demand representation of her views and needs in parliament is the ultimate expression of her equivalence with men.

2018 marked 100 years since some women were given the vote in parliamentary elections in the UK and 90 years since women got to vote on equal terms to men.

Last summer I joined a march in London with my fellow steering committee members of the Global 30% Club and many thousands of women, in celebration of the centenary of the 1918 Representation of the People Act and in recognition of those courageous women who fought so hard and battled against discrimination and prejudice to enable women to participate in this country’s democracy.

We have all heard of the Suffragette movement led by Emmeline Pankhurst and of course the brave Emily Wilding Davison who paid the ultimate price when she was killed when knocked down by the king’s horse at the Epsom Derby. But there were many less famous women who also risked much for the cause;  I subsequently discovered with pride that my great aunt Beatrice had been actively involved in the campaign whilst working as a governess in London, and I am sure that many of you reading this could also uncover a Suffragette ancestor.

Across the world, all countries except Vatican City have granted women the right to vote, but in many of them the women are either actively prevented from actually doing so, or are coerced to vote the same way as their husbands or brothers. Those women do not enjoy the same freedom to use their vote as they wish as we do in the UK.

There is no point moaning about the state of politics today if we don’t take action to try to change it for the better.  Your vote really matters.

I urge you to consider what you hope the country could become, and the type of healthcare, education, women’s rights and economy you want to have, and whichever candidate you may choose to vote for, make time in your busy lives on Thursday to go to the polling station.

Let’s take heed of the call to action contained within the slogans of the suffragettes – “courage calls to courage everywhere” and “Res Non Verba” (deeds not words).