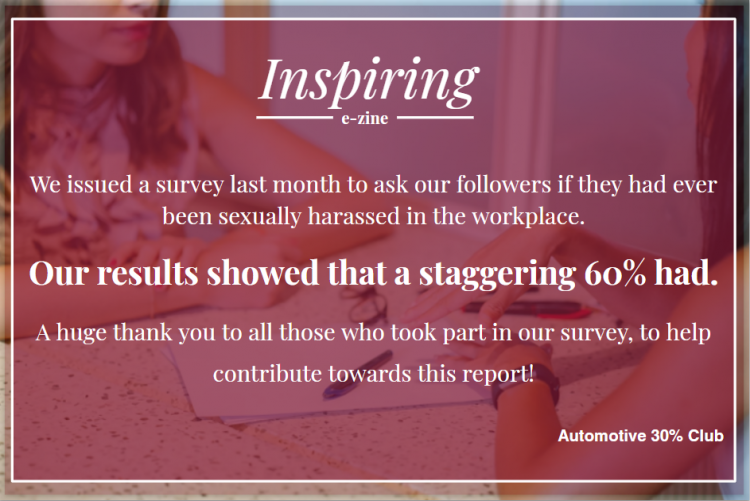 It is essential to show zero tolerance of sexual harassment in the workplace to ensure the business reaps the financial benefits of having gender balanced diverse teams.

If left unchecked, it is likely to affect the promotion prospects of women and can lead to a failure in retaining high performing female employees.

We issued a survey last month to ask our followers if they had ever been sexually harassed in the workplace. Our results showed that a staggering 60% had.

Of the 60% who had suffered sexual harassment, two-thirds of them confirmed they kept quiet about what had happened as they knew there was no point reporting it. 11% did report it, but no action was taken against the perpetrator. Almost a quarter however (23%) simply left their job because of it.

Not one of our respondents said that the perpetrator was disciplined for their actions.

It is not just an issue for the wider automotive sector. A ComRes poll for BBC Radio 5 Live in 2017 found that a shocking 53% of women and 20% of men had experienced sexual harassment at their place of work or study. The perpetrators against both sexes were predominantly men. 1 in 10 of the women had been sexually assaulted.

The Equality Act of 2010 defines sexual harassment as “unwanted conduct of a sexual nature which violates dignity” or “creating an intimidating, hostile, degrading, humiliating or offensive environment”. It’s hard to determine the scale of the issue within organisations because most women don’t report it if the culture is not supportive, they simply leave.

Automotive 30%Club Founder Julia Muir explains that sexual harassment often takes place where little action is being taken by the leadership to address gender balance, and this damages both the employees and the business:

“A report by The Women and Equalities committee draws a correlation between sexist behaviour and inequality in the culture of an organisation, stating “sexual harassment can be considered both a cause and consequence of sex inequality, and some of the evidence we received drew links between sexual harassment and other manifestations of gender inequality in the workplace such as the gender pay gap and the underrepresentation of women in leadership roles.”

Those who stay and endure it may suffer damage to their mental and physical health, and are unlikely to perform to their potential or progress with their careers. Some men use sexual harassment as power against women to prevent them from effectively competing. Women who have suffered workplace abuse describe changing their behaviour as a result, wearing different clothes, shoes that they could run away in, and missing breaks to avoid sitting with male colleagues passing round pornographic images on their phones.

Young women, disabled people, or members of sexual minority groups are more likely to suffer, along with workers in precarious employment contracts. These people are viewed as weaker with less power, and less likely to be listened to or valued by the business over the perpetrator.  The vast majority of perpetrators are men, harassing both women and men. If young women or minority groups are leaving a particular area of your organisation, this could be why.”

*This is an extract from Julia Muir’s upcoming book ‘Change the Game – A Leaders Route Map to a Winning Gender Balanced Business’ available on general release through Practical Inspiration Publishing from the 9th of March 2021.*