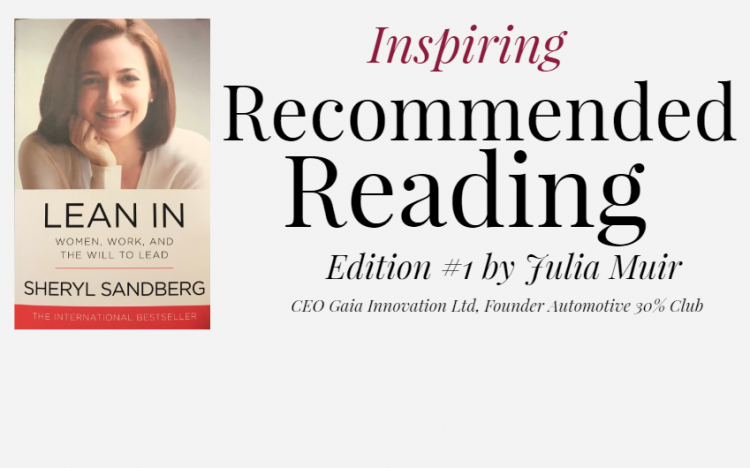 Back in 2016 when I decided to start a campaign to get a better gender balance in the UK automotive sector, I started my research by reading “Lean In” by Facebook’s COO Sheryl Sandberg.

Lean In is a seminal book that not only charts the career and personal views of a leader of one of the most successful technology firms in the world, but also draws upon a rich seam of knowledge and information that helps us to understand why we have a gender gap in business, and suggests ways to tackle it.

Through “Lean In” I discovered the famous Heidi-Howard experiment from Columbia University, that has had a huge impact on my understanding of why the gender gap is hard to close. It found that a profile of the successful entrepreneur Heidi Roizen, when presented to a sample group of men and women, was deemed to be that of a selfish person who they would not want to work for. However, when the researchers presented the same profile to a similar sample group but changed the name of the person to Howard, the person was deemed to be a far more appealing colleague. The study reinforced lots of other research that shows that success and likeability are positively correlated in men but negatively correlated in women. Awareness of this fact has far-reaching ramifications for how we achieve our 30% by 2030 goal, and our leaders must be mindful of it when interpreting the 360 degree performance review ratings of female leaders and how women are assessed for promotional opportunities.  When a man is successful, both genders like him. When a woman is successful, people of both genders like her less. This creates a trap for women whereby they may avoid bringing visibility to their abilities and successes in order to remain popular.

Sheryl also writes about mentoring and that you cannot simply ask someone to be your mentor – a mentor chooses a mentee who they want to see grow and develop. She notes that men rarely ask for mentors and focus on how they can manage the business, whereas women are often too focused on wanting advice on how they can manage themselves and their careers. She refers to women’s search for a mentor as becoming the modern day equivalent of “looking for a Prince Charming” who will solve all their problems and magically propel them up the career ladder.

Her story, however, has a common thread weaving through it of male advocacy, allyship and sponsorship. Yet I find it interesting that she doesn’t give it any direct acknowledgement. She writes of being the only woman amongst the 7 top “Henry Ford Scholars” in her year group at Harvard Business School, and that she didn’t tell anyone other than her confidante and “closest friend”, Stephen Paul, for fear of being disliked. She also talks of Larry Summers, who she met through her first job after college when he was the chief economist at the World Bank, and who became her thesis adviser and then an ongoing mentor and true sponsor for the rest of her career. He would advise women to realise their monetary value and “bill like a boy”. Later when he became Head of the US Treasury he gave her a job there.  She mentions that Lant Pritchett also at the World Bank was the person who advised her to study business at Harvard, and taught her how to do calculations using Lotus. It is clear that the sponsorship of a hugely influential man who believed and trusted in her abilities helped her career. I believe that we should encourage senior men to put more effort into identifying women with potential, perhaps even through formal processes such as skip level personnel development committees. Rather than starting with the position that women need the help of a mentor, we should consider that often women don’t need the help; they just need the visibility and recognition of their ability and potential.

One of Sheryl’s key messages is that motherhood should not mark a period of being put in the slow lane at work, and she urges women to resist that pressure. I fully agree with this, because it is usually the trigger that starts to open the gender gap in terms of remuneration and promotion, and women currently seldom recover their position. HR policies and the attitudes of well meaning but culpable managers work together to make it difficult for women to continue on the same career trajectory.

When I became a mother, the importance of work being well remunerated, fulfilling, enjoyable and purposeful came into stark relief – why else would I be leaving my baby at home to do this? Yet many women returning after maternity leave are put into less business critical roles, harming their promotional prospects and ability to make a significant contribution. The longer they stay in these roles, the more harm is done to their prospects. Women may need to work fewer hours for a period after becoming a parent, but so should men, and neither should be expected to do a job that is lower than their capability and ability to contribute to business performance. Many women I speak to leave during this phase not because they cannot juggle motherhood and work, but because the work they are given is simply not motivating enough. So Sheryl’s advice is that women should “lean in” during this phase, but I would add that it is their organisation that has to enable this to happen and stop parking them in a career cul-de-sac, and that it is just as important for men to “lean out” a little when they become a father.

The book serves as an incredibly useful catalogue of the most influential studies and source data. Anyone working to understand why we have a gender gap and why we must close it, must read the notes pages and work their way through the detailed directory of research.

I recommend that you read it because you will find those golden nuggets of evidence that you need to encourage others to support your strategic goal to get a gender balanced business.

With Special thanks to Anita Fox and Facebook for supporting our Inspiring Automotive Women Awards recently by providing a copy of this book for each of our guests.

Please do email victoria@automotive30club.co.uk should you have an inspiring and motivating book you wish to recommend to our readers.