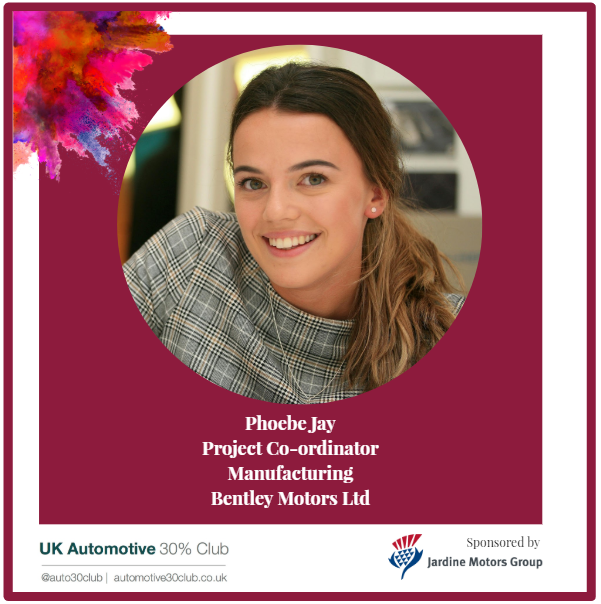 Phoebe studied Business and Engineering from the age fourteen at The JCB Academy UTC, the first school of its kind in the country. In its pioneering year, she was part of just 10% of female students. The academy decided very early on that this balance had definite room for improvement and worked to engage local primary schools and invite girls aged 10-11 to an annual ‘Girls into Engineering’ activity sessions, led by the students. These sessions were made up of fun and engaging challenges that encourage teamwork, technical thinking, and innovation. The JCB Academy has now been open for nine years and Phoebe has supported this event for two years as a student, was the event lead for two years whilst in sixth form, and has returned each year since leaving as a ‘Woman in Industry’ and as Bentley Motors’ ambassador. This year sees the 2019 student admissions with 25% female attendance, and Phoebe recently met learners that had attended her sessions back in primary school, which prompted them to apply.

In her spare time, Phoebe likes to play and coach rugby union and touch rugby. She has played for a total of eighteen years after starting at age five and also coaches an U13’s team weekly at the local rugby club.  Phoebe, along with 2 other coaches set up the junior girls section at the club four years ago and they now have over forty girls playing aged 12-18 from the local area of Crewe and Nantwich. Recently, Phoebe has also been selected to represent England at the European Challenge Trophy Touch Rugby competition.

Early on, Phoebe’s mum was an integral part of facilitating her belief that gender was not a limiting factor; a general stubbornness she was born with. Her siblings and Phoebe all played rugby, she also all went to ballet- her brother was one of the best. Phoebe was the first female Cub Scout allowed at their local Scouts centre, and now there are more girls than boys there (She tried Brownies but climbing trees and building fires was much more appealing). Phoebe’s mum ingrained equality and equal opportunity to all and empowered all of her children to question stereotypes, her mum encouraged her to explore Engineering and Manufacturing initially and has been her biggest advocate ever since.

Upon hearing the news of being selected as one of the 30 winners, Phoebe stated: “I was surprised, very excited, and honoured to have been nominated by my peers for an award as incredible as this.”

A conversation with the industry’s most inspiring women