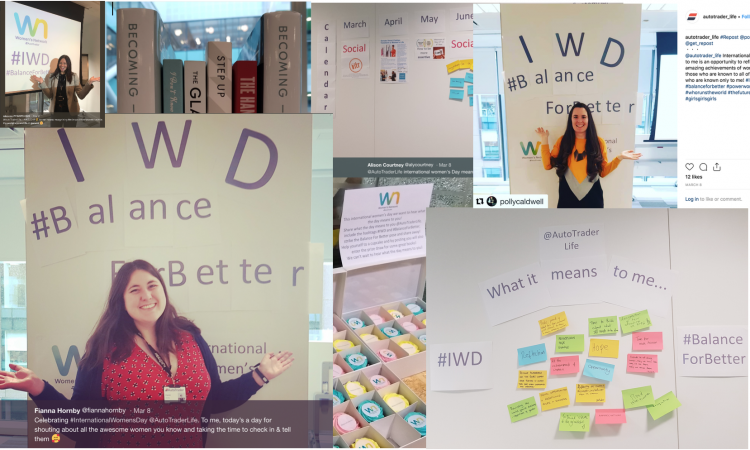 We find, as I’m sure you do in your own organisations, that having the word women associated to something can occasionally lead to some men believing that it is not for them; that it must be something exclusive, just for women…only.

We decided to invite people to share what the day meant to them. A simple concept but something that we have found to be very powerful. There is no right or wrong answer to this question, people may respond with something deep, meaningful and profound, or they may respond with a single word. All responses are valid!

Before the day itself, we wanted to get the word out there. Auto Trader isn’t a huge organisation but still emails, posters and messages can get missed or ignored. We wanted to make sure people knew our event was happening, as well as get the ball rolling and people thinking about what the day meant to them. So, we decided to do a series of short videos of people sharing what the day meant to them. We then shared these videos on our internal intranet site and on Slack, one per day in the week leading up to the 8th of March.

We picked four people from across the organisation, two men and two women, in a variety of roles which included our COO as well as one of our entry level developers. Having the variety of roles definitely increased the interest people had in the videos and also resulted in a really interesting range of views and opinions.

On the big day itself, we encouraged our colleagues to share what the day meant to them either in person or on social media. We had a range of topical goodies up for grabs, including Becoming by Michelle Obama and tickets to The Funeral Director, a story of sexuality, gender and religion in 21st century Britain. We had a room decorated with information about the day and with a dedicated wall where the perfect #BalanceforBetter pose could be struck; to top it off we had our women’s network there to provide information about the upcoming calendar of events!

There were some great phrases and quotes shared by the attendees, but moreover there were some excellent discussions and debates had. Equality, diversity and inclusion are all such emotive subjects and it’s not often that we hold a forum for these to be discussed in.

The highlight of my International Women’s Day 2019 was engaging those who wouldn’t usually engage, all by asking the simple question: “What does it mean to you”.