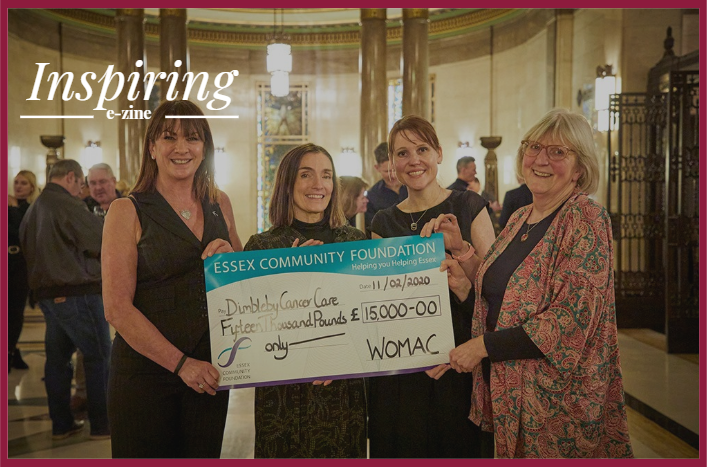 People’s kindness and willingness to help is priceless and needed more than ever. We are witnessing a situation, considered unclear and scary to many, trying to fight a virus not witnessed before.

A virus causing sadness and paranoia, but also one making us stronger in uniting us, encouraging kindness, selflessness and goodwill, all of which are key traits to humanity. And if there is a lesson to be learned from this, it should be that we need each other’s support when faced with a challenge. Whether this is Coronavirus or cancer, floods or bushfires, all of which bringing the feeling of uncertainty and fear, we should remind ourselves what humanity really stands for and, more importantly, what role each one of us wants to play as a human being.

Women On the Move Against Cancer (WOMAC) is a useful reminder to the UK automotive industry that to fight cancer we need to be proactive. Established in 1979, WOMAC unites the passion of approximately 50 female volunteers working in the automotive and associated industries to help cancer sufferers. Through organising events and fundraising activities, WOMAC has donated more than £1 million to over 50 cancer related projects and together with its supporters has helped the search for more effective cancer treatments and improved the quality of life for cancer patients, their families and carers.

‘The WOMAC Party’ has become a major annual event in the automotive calendar in mobilising the industry’s efforts to support a different cancer related cause each year. This year’s chosen charity is Dimbleby Cancer Care and WOMAC recently announced the donation of its £15,000 pledge towards the charity. The funds will be used to support and inform cancer patients and their families on how to deal with the diagnosis. Although a small contribution to the work of those involved in cancer care, WOMAC’s committee and patrons are confident that every little counts and are determined to find other ways to help.

Sponsored runs and bike rides are just a couple of examples showing how WOMAC’s supporters have gone over and beyond in their efforts to fight cancer. The group’s chair Georgia Fox went as far as running the London Landmarks Half Marathon in 2019 to celebrate WOMAC’s 40th anniversary and raised over £1,600 for EHE Rare Cancer Charity. A team from Company Car Today took on the 24-hour Le Mans cycling challenge in 2019 to support WOMAC’s chosen charity for the year. The opportunities to get involved and help are endless and WOMAC is always welcoming people’s kindness and eagerness to raise funds or help with ideas for other fundraising initiatives throughout the year.

‘We are extremely grateful for our supporters’ generosity without which we could not have held our annual fundraising events. Prizes for the popular WOMAC raffle and tombola, items for our silent auctions and funds donated to cover costs related to venue hire, catering and other event related expenses are just a few examples of how far people’s benevolence goes’, shared Georgia Fox.

Sue Loy, Patron Co-ordinator, shared that WOMAC relies on patrons to help spread the word about the group and its initiatives. ‘Having more patrons joining WOMAC and representing the automotive industry as widely as possible will be of great help to make the fight against cancer a truly united effort’, said Sue.