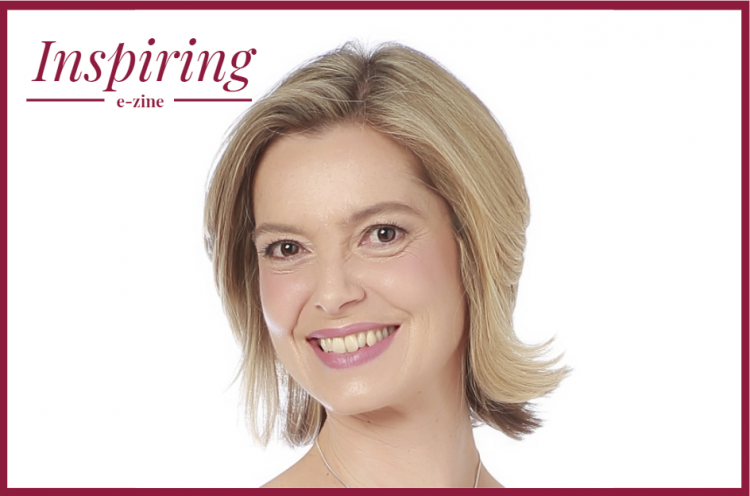 As a coach, one of the models I refer to most frequently is from the book Radical Candor by Kim Scott. Scott defines radical candour (let’s use the English spelling) as ‘a management philosophy based on Caring Personally while Challenging Directly’. It’s candid because it encourages us to say what we think and radical because most of us are conditioned not to do this.

In a nutshell, the model has two dimensions: Care Personally and Challenge Directly. Combining these two dimensions creates four quadrants, as below: 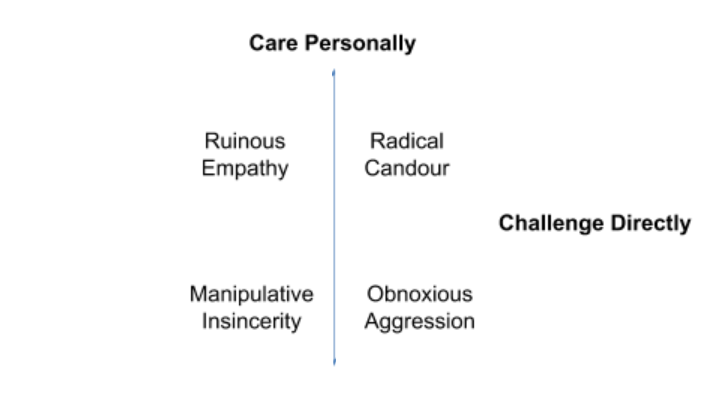 If you demonstrate to a colleague or team member that you care personally about them and their work and you are able to challenge them directly, then you are demonstrating Radical Candour, e.g. “I liked your point about sales in Q3. Can you clarify your thinking around the Q4 plans?”  If, however, you challenge directly without the care, you are likely to be demonstrating Obnoxious Aggression, e.g. “Your plans for Q4 don’t stack up – they clearly haven’t been thought through.”  Lots of care and little challenge results in Ruinous Empathy, e.g. “I liked your point about sales in Q3.  I’m sure Q4 will be just fine.” and low levels of both finds you in the territory of Manipulative Insincerity “You’re doing just great. (I need to find a new Sales Director)”.

Although we all know individuals who are obnoxiously aggressive, the most frequent trap that teams fall into is over-politeness, hence Ruinous Empathy. For both innate and cultural reasons, challenging directly seems to be the most difficult skill to pull off.

Challenging directly can be especially difficult for women, particularly in male-dominated workplaces. The majority of us (women included) have an unconscious bias that expects women to be polite and gentle. Thus when a woman speaks out, she violates this unconscious expectation and is much more likely to be perceived as obnoxiously aggressive (than a man saying the same words in the same tone of voice).

This creates a double bind for women, since one of the main reasons women do not progress in organisations is because they are perceived as not ‘tough enough’ or ‘don’t speak up’ in meetings and so on.

I have experienced the radical candour unconscious bias trap myself. I was explaining the content of a ‘women in leadership’ training programme to a male colleague.  I shared some of the evidence-based research that explained why women-only programmes were important and he started shaking his head.

In order to counter the exasperation and defensiveness his reaction generated in me, I became more forceful in my delivery. He gave me feedback at the end of the meeting that he had experienced my behaviour as obnoxiously aggressive!

I have heard versions of this problem countless times from female coaching clients.

How to overcome the traps

So, what can we do? No matter our gender, race, age, bodily-status, sexual preference etc., how do you continue to ‘care personally’ when someone is apparently violating your most deeply rooted values?  Because, and here’s the irony, unless we remain serenely, radically candid, our messages will continue to be dismissed.

My approach to helping clients achieve radical candour is based on three steps. First, I encourage them to get clarity on the overall outcome that they want.  Second, various coaching exercises help them to get clear on their values and thereby raise their awareness of what their triggers are likely to be. Only then, finally, do we practice the behaviours associated with radical candour.

Here are some examples:

The pace of change

For some clients, and I will admit myself, these changes can sometimes feel painfully slow and counter-intuitive.  Why should we have to change our behaviours in order to overcome unconscious bias in other people?

However, when linked to wider activities, such as gender pay gap reporting, flexible working lobbies, the initiatives of the 30% Club and other such bodies, we create a top-down and bottom-up movement that is difficult to ignore.  It is also what allows us to be true to ourselves – the last thing we need is for women to feel that they have to be someone else to succeed in the workplace.  There is nothing radically candid about that.

To learn more about how JP Leadership Coaching can help you build radical candour in your organisation and yourself, contact Julia on 07967 497779 or julia@jpleadershipcoaching.co.uk.

Julia has a background in corporate leadership development and has been a leadership coach for 12 years. She has a Masters in executive coaching and First Class degree in Psychology from the OU. Client organisations include UK Sport, Santander, McLaren, Nissan, Coca Cola and Sky… with a diverse mix of individual clients, including the most senior-ranking female in the British army and the team leader of a Grand Prix pit crew!