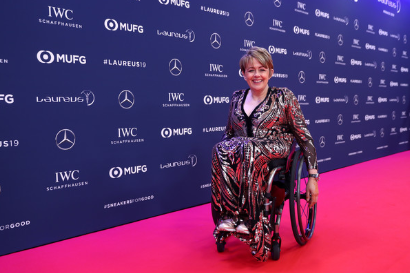 As another year draws to a close, we find ourselves reflecting on our achievements over the past 12 months, and whether work-based or personal goals that have been met.

For me December stands out in particular, not just because of the endless cheese boards and office Christmas parties, but because as a nation we recognise the achievements that have made us stand out and feel proud.

We have watched our favourite soap stars get thrown into a jungle to win stars, and the trashy shows featuring Britain’s best double acts. In my household, however, one particular Sunday evening in December we always sit down, along with thousands of other families around the UK,  to watch Sports Personality of the Year and to celebrate a year of sport from the comfort of our sofa.

This year saw eleven-time Paralympic champion Baroness Grey-Thompson honoured with the Lifetime Achievement Award. This honour is presented to an individual who has made a major impact on the world of sport during their career, and Baroness Grey-Thompson has certainly done that. The paralympic champion has spina bifida, the result of the spine and spinal cord not fully developing during pregnancy, thus leading to defects in the spinal cord and spinal bones.

Not allowing her disability to hold her back, the now 50-year-old went on to win 16 Paralympic medals in total and broke 30 track world records, throughout her time as an athlete.

Grey-Thompson was said to ‘fall in love with wheelchair racing at the age of 13’, before joining the British squad at only 17 and going on to win her first Paralympic medal in the 400m at Seoul in 1988. She later won her first four titles in the 1992 Barcelona Paralympic Games, where she also became the first woman to break the 60-second barrier in the 400m.

The five-time world champion went on to win more Paralympic golds before her retirement in 2007, along with other achievements including a total of six marathon wins, one just three months after giving birth to her daughter. Grey-Thompson has spoken on several issues since becoming Baroness, including sport, disability rights and welfare reform.

Baroness Tanni Grey-Thompson is truly an inspiring woman who has excelled in her chosen field.

The Automotive 30% Club supports diversity and inclusion. In line with our future plans to launch Inspiring DAWN (a Disability and Wellness Network with the aim to increase progression opportunities for disabled women), we will share inspirational stories with the #InspiringDAWN hashtag celebrating such women who work to overcome significant extra challenges and go on to achieve success in their field. We will aim to raise awareness of the importance of including these women in our 30% by 2030 strategy and encourage our members to be their advocates, allies, mentors and sponsors.