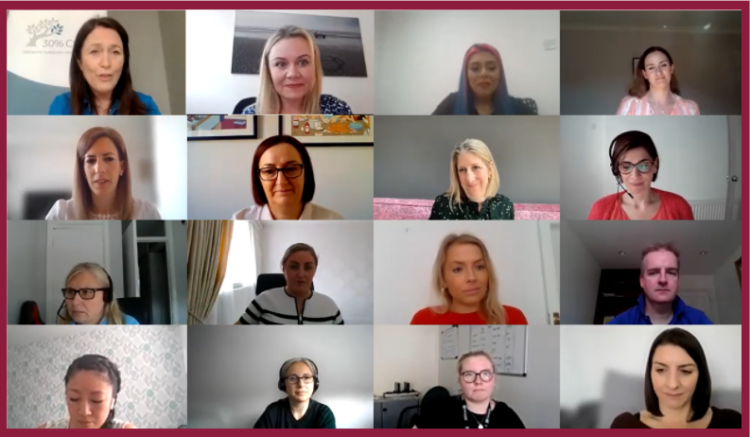 On Friday the 25th of March, we held our #IWD2022 virtual event, which reflected on the impact of International Women’s Day 2022, and discussed how we can continue #BreakingTheBias within the automotive sector.

Julia Muir, Founder of the Automotive 30% Club was joined by a panel of award-winning automotive women, Hannah Litt of Motorpoint, Sharon Ashcroft of TrustFord, Ciara Raison of V12 Vehicle Finance, Dora Boganyi of Toyota (GB) plc, and Louise Reynolds of Jaguar Land Rover, who each described their experiences of ingrained bias, shared some of the actions being taken within their organisations to help break the bias and highlighted what women in automotive can be doing to help.

Julia Muir began the event by highlighting the origin of International Women’s Day, highlighting the point that it has become somewhat synonymous in the UK with celebrating and recognising the achievements of women, becoming commercialised with lots of performative and often patronising PR stunts.

The origins were in the socialist movement in the US in the early 20th century, with women asking for the right to vote and promoting equal rights with men. March 8th (International Women’s Day) 1917 in Petrograd Russia, led to the second Russian Revolution.

Julia urged attendees to note that the essence of International Women’s Day is the acknowledgment that women across the world still do not have equal rights to men, and a call to take real action to change that.

Julia mentioned the theme of Breaking the Bias this year, which implies that much of the inequality women face is through bias by men and women, whether it’s intentional or simply systemic in a society that has historically been designed for men by men. A UN report in 2020 found globally almost 90% of men and women hold some sort of bias against females. So our event went on to ask ‘are we actually Breaking the Bias in automotive and in wider society?’

Our panelists then discussed some of the ingrained biases that women still face in the workplace and wider society, including the variety of barriers in place for women. Hannah Litt spoke about the importance of prioritizing intersectionality and acknowledging that even within gender bias, everyone can have their own unique experiences of discrimination. Further to this, Ciara Raison shared some of her most recent encounters with ingrained bias in the present day. Louise Reynolds spoke about the importance of remembering that bias is within all of us, including women, and urged attendees to challenge their own biases and acknowledge that we need to take action in order to question our own biases.

When asked ‘what can women do to help Break The Bias’, Louise encouraged our audience to be brave and challenge, something which we can all do together, and help support one another long this diversity and inclusion journey.

We also observed some of the real action being taken within automotive organisations, and Automotive 30% Club member companies. Sharon Ashcroft spoke in detail about the TrustFord ‘Leading Ladies’ Network, which is designed to encourage women to apply for more senior roles, offers mentors, and allows women within the network to open up in a more informal setting, be it about work or more personal challenges.

Dora Boganyi went on to highlight how Totoya GB are addressing continuous inclusivity and touched on their Women on the Verge Network, which helps members share their personal experiences of bias, learn from one another and use tools to be visible and to be brave.

In addition to this, Ciara shared how V12 Vehicle Finance has begun setting KPIs and targets for diversity and inclusion initiatives within their organisation, to ensure that it is on the radar of those in senior positions. She also added that 20 employees within V12 Vehicle Finance are now ‘inclusioneers’ who help drive change and call out D&I.

Similarly to this, Hannah ended the discussion by speaking about Motorpoint’s employee network, who play a part as the ‘eyes and ears’ of Motorpoint, in order to be the ‘temperature check’ and address any D&I issues that may still be in place, as well as doing management training to ensure that unconscious bias becomes continuous.

A huge thank you to each of our panelists who helped to question ‘are we really breaking the bias’, and to those who attended and are helping to change the game in automotive.

If you weren’t able to join us, please visit the video below to watch some highlights of the event.