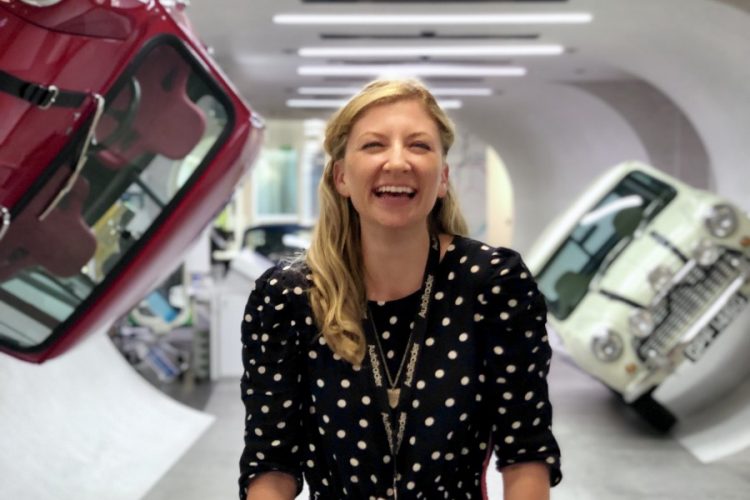 “There's a special place in hell for women who don't help other women.” ― Sheryl Sandberg, Lean In: Women, Work, and the Will to Lead

It wasn’t actually a fear of hell that drove me to volunteer at the Inspiring Automotive Women Day, but Sheryl hits the nail on the head in terms of addressing how important it is to support one another as women.

There are few industries where this is more important than the Automotive one, where today, in 2019, women make up a mere quarter of the workforce. The UK Automotive 30% Club is obviously charging on their mission to change that and nowhere was this more evident than on the 3rd  May at the Volkswagen Learning Centre where the day’s hashtag #InspireAndBeInspired delivered in abundance. I don’t know how much I inspired the students as a volunteer but they definitely inspired me…

“Only really young kids use that” laughed one very knowing student with a wry smile that showed she felt equal parts sorry and embarrassed for me when I asked if she used the social media app called ‘TikTok’ (formerly musical.ly. The laugh was akin to the kind I give my Mum when she asks me where her What’s App messages have gone (she’s 74 and not very tech savvy but still the wisest woman I will ever know). We were only an hour into the day and I had already learnt something incredibly valuable; no one in their peer group over the age of fourteen uses ‘TikTok’. Back to the drawing board on ways to use social media to reach first time drivers then.

This reciprocity of learning from the students as well as them (hopefully) learning from us set the tone from the beginning of the Automotive 30% Club volunteering day and lasted throughout the day and it was moments like these that made me love the girls’ unfiltered honesty.

The group of volunteers I was in, hosted the ‘Advanced Technology World of Automotive’ session, the aim of which was to provide the female students with a better understanding of how technology is changing the sector and the jobs within it. I was specifically talking about how communications have changed as a result of social media and content marketing. I thought I’d wow them with the power of celebrity and so spoke about the female guests we’d featured in our YouTube series called ‘Car Confessions’.

At this point, lesson number two was in full swing for me; celebrities don’t transcend generations and fourteen-year-old girls hold YouTubers and influencers in as high regard as I once held Sporty and Baby Spice.

I went on to speak more about how content production is a facet of the industry that they might not have considered before and how there’s a wealth of statistics which demonstrate how influential video is in helping consumers to make buying decisions. We spoke too about how consumers trust an individual’s opinion so much more than a brand’s, hence why we work with celebrities, influencers and peer-to-peer groups etc at Auto Trader.

We did the same presentation four times to four different groups of students and set them a task at the end; to market the new Audi e-tron using social media channels. Each group interpreted the task differently, whether it be through the content format they chose or their platform of choice - it was incredible and rewarding to see how quickly they absorbed the information we had given them and applied it in situ. On harnessing the power of celebrity and influence, one group got straight to work on their marketing campaign by putting Drake behind the wheel of the e-tron – I mean, why not? We hadn’t set a budget after all.

After lunch, we had the ‘speed networking’ section of the day where the students were invited to ask us some pre-prepared or spontaneous questions. They didn’t mess around. The question “What does your typical day look like?” made me realise how much of my day is spent in meetings and that’s something I need to address; another lesson learned.

Another question was around the value of going to university versus not going. I explained I had been to university and loved it but that it does obviously have its drawbacks - namely student loan repayments which I had only just cleared a year before, ten years after graduating (oh the gasps)! I did explain that it is automatically deducted from your pay though, so you don’t really notice being short of money and that the experiences university had given me were worth it).

Then came my favourite question (because of where it led to) “Where did you get your boots?” I explained I treated myself in the Christmas sale, (with the money I earned from my role in the automotive sector!). This prompted a follow up statement from another of the students, “You don’t look like you work in the car industry, you look like you work in fashion”. This kick-started a whole (speedy 2 minute) conversation about how other people have said that to me before (including other women, who can be just as guilty for perpetuating stereotypes as men). We discussed how you can still be ‘you’ when you work in Automotive and how to that end, I’m on the look-out for ways that we might be able to incorporate fashion brands into relevant partnerships with Auto Trader in the future. (Marie Claire is actually already happening via one of our resident journalists, Erin Baker).

To conclude the day, we then heard from an inspirational panel of graduates about their varying journeys into the world of automotive before the day closed with empowering messages from Volkswagen Group HR Director, Penny Burnett and Automotive 30% Club Founder, Julia Muir.

As we left the building and the girls poured out to fill their respective coaches home and one girl walked past my car (an old but new-to-me convertible VW Beetle and said “That car is so cool” and in that moment I was filled with secret pride (even if my TikTok knowledge and celebrity benchmarks did leave a lot to be desired).

*No bras, nor cars, were burned in the making of this blog.*