Home » Featured » “Focus less on what has held us back, and more on what will move us all forward”
Featured | Guest Blogs, Interviews & Features 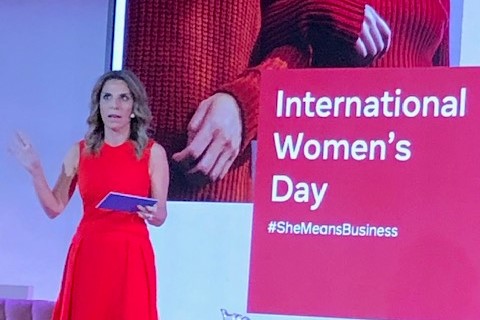 “Focus less on what has held us back, and more on what will move us all forward”

So said Nicola Mendelsohn, VP EMEA Facebook at their International Women’s Day Event #SheMeansBusiness, announcing that Facebook will double the number of women working for them globally.

I agree wholeheartedly; too often the gender equality conversation leads to men feeling blamed for the barriers women face, or defensive for having succeeded when women do not. We must start to clearly communicate how gender equality will be a win:win for all.

I was privileged to listen to so many amazing women at today’s event, so I thought I’d share with you the key messages.

Chaka Sobhani, Chief Creative Officer of Leo Barrett raised the importance of having women working on all creative projects. “It is possible to write content for a population that you don’t represent, but you will always make mistakes” She cited a male team creating an ad for a mobile phone featuring women at a nail salon “all women know it’s the one time and place you can’t use your phone!” She said “You have to put gender balanced teams at the top of the agenda with a KPI otherwise it just becomes a nice fluffy thing to do”

Kubi Springer, author and founder of The Kubi Springer Company, a lifestyle-marketing agency explained how it’s essential for women to build a personal brand. “Your work will not speak for itself. You can’t rush home, you have to be in the room, be the connector between others, and increase your social capital.” She is right; I’ve always believed that it’s not what you know or who you know, but who knows you for what you can do.

She also spoke about the danger of letting “Mummy Guilt” lead you to alleviate your husband from his responsibilities as a father. This was definitely me, and now older and wiser, I’ve realised that always heading home for the kids so their father could “stay in the room” at work should have been approached with a better balance, so we could both have equally fulfilling work and family time. I thought I was helping him, and now I know I wasn’t.

Perhaps most inspirational, was 20 year old activist Amika George, who at the age of 17 discovered that 1 in 10 girls in the UK were missing school for several days each month due to being unable to afford period products. This unequal access to education for girls from low income families shocked her so much that she successfully campaigned for schools to be obliged to provide free period products, in the same way as they provide toilet paper and hand soap.

So you’re never too young, or seemingly lacking in power and influence to be a game changer in society. Indeed as Margaret Mead – American anthropologist in the 60s/70s said “Never Doubt That a Small Group of Thoughtful, Committed Citizens Can Change the World; Indeed, It’s the Only Thing That Ever Has.”

Our Automotive 30% Club companies, and the women and men within them, will prove to be such game changers.

With thanks to Anita Fox Head of Automotive at Facebook, and key supporter of the Inspiring “Super-Network.”