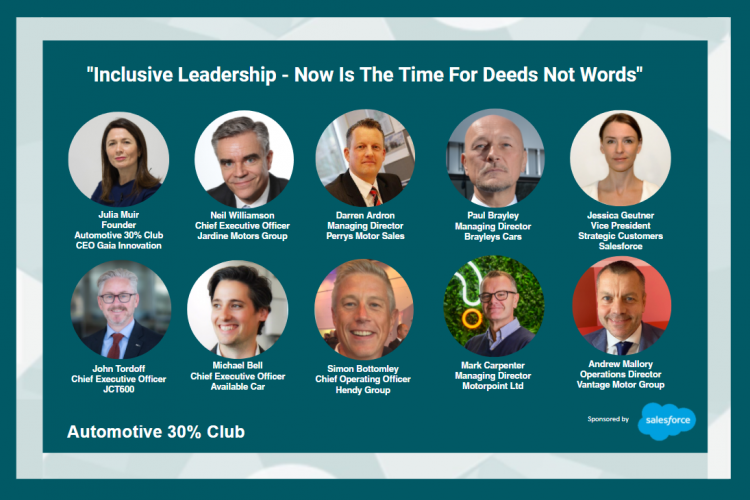 I recently co hosted an executive round table discussion, kindly sponsored by Salesforce, with the aim of exploring the issues of gender balance and inclusive leadership within the automotive industry.

We established that to reap the business benefits of a gender-balanced business, game-changing leadership that is inclusive, purpose driven, performance focused and principles led is required. We discussed how important it was that the leader of the business was seen as authentically believing that gender balance is a strategic imperative, and being able to demonstrate that authenticity. This is a challenge, because most automotive leaders are middle-aged white men, and an audience of similar men could think you’re saying it because it’s the latest flavour of the month or for PR.

Be Authentic
It was shared that what works well to overcome this is telling a compelling personal story that authenticates why you as a leader are so fully behind this and are not just jumping on the latest bandwagon. It might be your insight into how a high performing female relative was treated badly in a male dominated workplace that makes you know this is the right thing to do, or that you don’t want your daughters to face more career barriers than your sons just because of their sex, or it could be that the best leader you ever worked for was a woman and you know the value such talented women add to the business. This authentic leadership and personal zeal works because it shows that
this is a matter of personal importance to you so it won’t be pushed down the agenda or treated as a project or initiative; it’s what you want your business to look like and the way things will be run.

Show Zero Tolerance
It was confirmed by another group member that as a business leader it’s essential to have the strength in your own conviction on equality and inclusion. A policy of zero tolerance of those who don’t behave appropriately and so make the workplace an uncomfortable place for women has to be implemented. Some men who are successful in their jobs think they can get away with it and it won’t apply to them but they are “dinosaurs” and restricting the overall success of the business. It’s essential to have some tough conversations and take action to remove them, and others learn from that example. The talented new people you have worked hard to recruit won’t stay in an old
fashioned culture where insulting “banter” is the norm.

It was discussed that it really helps when men step forward and are male allies, for example in the form of calling out a man interrupting a woman or not letting her speak, or the jokes at the expense of women, or inappropriate conversations at the coffee machine. What really makes the change is when everyone as a team takes responsibility for stopping it, and being accountable for that, rather than the women or just one or two male allies.

Model Professional Behaviour
It was suggested that a good way to tackle banter and inappropriate behaviour is to frame the expected good behaviour as professionalism in the workplace, getting everyone to understand some basic principles and guidelines, so that they know what good looks like. At that point it’s essential to have a zero tolerance policy for people who think that this definition of professionalism and respect for female colleagues doesn’t apply to them, perhaps because they’ve been a high performer in other areas.

What worked well in one company was showing a video re-enacting certain scenarios that make women feel uncomfortable or excluded, and clearly showing the impact on the women who experienced it. This enabled the leaders to witness the behaviour “first hand” and share the experience of the women, and learn very quickly what constitutes unacceptable behaviour from a visual representation. This technique can be far more impactful than communicating through written notices or emails.

It was also mentioned that male colleagues who were witnesses, rather than the female victim who felt powerless or feared a backlash, are now reporting some cases of sexual harassment or sexism. This is a positive step forward and will help to prevent further events if the potential perpetrator is fully aware their male peers will not back them up.

Challenge Silent Male Resistance
The point was made that it’s easy to deal with overt sexist or inappropriate behaviour, but it’s much harder to tackle silent resistance in white male leaders in senior roles who do not overtly oppose, but do undermine the message when your back is turned. Suggested solutions for this was that it’s important to genuinely change their behaviour, and to develop a culture where it’s ok to call things out and point out that what was said or done was insulting or excluding women. Although their opposition is not overt, it’s pretty easy to spot and although they think they’re great at covering it up they’re actually not. As a leader you can’t ignore this and you have to challenge it, because if they
continue expressing out-dated views and aren’t inclusive leaders and yet appear to still be successful, it undermines everything you’re trying to do on gender-balance and culture.

The Double Positive of Mentoring
It was also shared that it’s essential to persuade and educate the male managers in the business. Many think they’re fair-minded and not sexist, but they simply don’t know what it’s like to be a woman trying to progress in the business. This can be successfully addressed through a formal mentoring scheme where senior male managers mentor a woman at a junior level, and also with cross company schemes such as that offered by the 30% Club. Although there are clear benefits for the female mentee, there are actually significant benefits to the business of opening the eyes of male executives and enabling them to think and act more inclusively. They learn to see the male
dominated work environment from a woman’s perspective, and how behaviours and practices can inadvertently or even intentionally exclude women, and they stop doing them.

Values Create Value
We discussed that the tone from the top is absolutely critical and sets the culture and the way things get done. It’s important to link this to the company’s core values, and to show how inappropriate behaviour contradicts those core values. It was suggested that building an inclusive culture is all about effective leadership, and so a good place to start is with educating the leaders in the business and giving them the skills to be able to deal with different issues. A good practice is to take a top down approach starting with a focus on the senior team and working down to next level and then line management and then future potential managers, confronting out-dated views or poor decisions full on, but with an educational angle rather than conflict, and explaining the benefits and get buy in. Anonymous employee engagement surveys can be used to bring issues that are going on under the radar to the surface, and action must be taken to address those issues. They can also be used to reveal unconscious bias, which is best overcome through an acceptance that we all have it, and nudging people to adopt good behaviours so their biases don’t affect their actions.

We heard that the founder of Salesforce Marc Benioff anchored equality as one of the company’s core values, and although automotive companies also have values relating to people, equality and inclusion are not usually at the very centre. Gender balance and inclusion are real success factors for Salesforce because of the increased customer insight and innovation that comes from having a mix of people with different life experiences and perspectives. It was suggested that we can only innovate if everyone has a voice and equality is taken seriously.

Listen to the Underrepresented Voices
Some members of the group have established diversity and inclusion committees and networks. What works well is when the business leader is seen to fully support, attend when invited, and listen to the suggestions made and take action. They don’t lead it, because it is important that the women and other underrepresented groups have a voice and give their opinions unhindered, but they must use and act on the valuable insight it brings.

Female Talent Attracts Female Talent
Some members have made significant progress with female representation on the board and executive committee, but there was agreement that there are still a very low number of women in franchise director, GM, department manager and sales executive roles. It was discussed that more needed to be done to attract women to these roles and to support them when appointed, due to the issues that had been discussed earlier that can prevent women thriving in the business. When you have at least 30% female representation, the culture significantly changes.

What works well is to raise the visibility of women in those roles via social media, nominating the high performers or those who are inspiring others for awards, and making it seem more normal that women are in these jobs. Also changing the remuneration package to being a higher basic and lower commission.

Flexibility Comes First in Retail
It was shared that women can be successfully recruited into sales and management roles if you are a lot more flexible around working hours. It was stated that rigid working hours leads to excluding many talented women who have to do the school run, and there is no need now to stick to the old working hours. The past few months have shown how people can work very productively with more flexible hours. It was suggested that the industry “shoots itself in the foot’ by creating this reputation for working all hours when it isn’t necessary to do that. Many women work in other types of sales and retailing where there are flexible and part time working opportunities.

Summary
The discussion was refreshing because it didn’t follow the usual path of “how do we fix women to fit in with what our businesses” and focused far more on the real challenge of “how we fix our businesses to ensure women can fit in”. This acknowledgement that we must stop things happening in the workplace that undermine, knock the confidence of, practically exclude and sometimes actually harm women is an important step forward and means real progress will be made. Choosing to innovate and challenge the traditional ways of doing things is the hallmark of a game-changing leader, and essential to achieve the goal of creating inclusive cultures and winning gender-balanced
businesses. 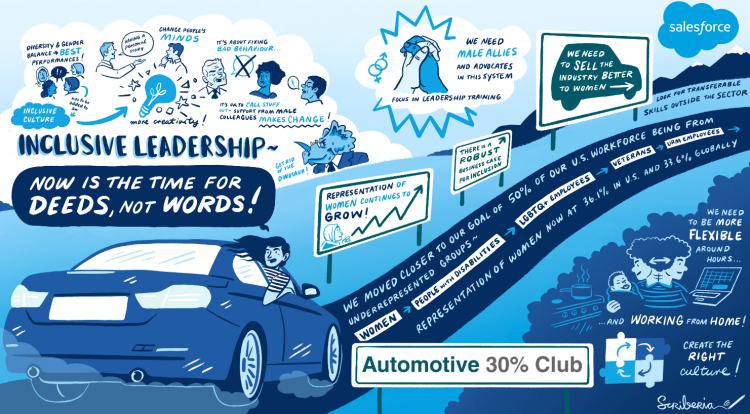