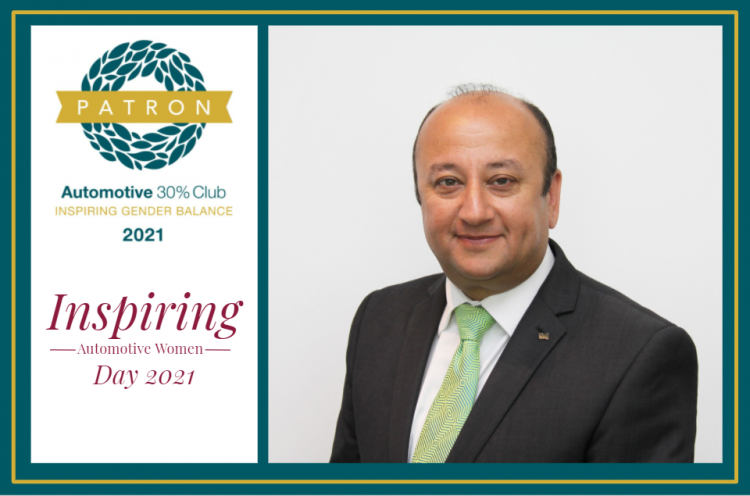 Passionate about gender equality, Daksh hopes his commitment of becoming a Patron of the Automotive 30% Club will spark other companies to really consider what they are doing to create environments which are inclusive to all.

He comments: “We still have a long way to go to embed this culture across the industry. It is not just the right thing to do but it is absolutely the right business thing to do.”

He champions celebrating success stories and believes this is something we should continue to do as it demonstrates anyone can be successful in this industry. He also believes we need to continue to create awareness of how fantastic the sector is. “It’s irrelevant of your age, your race, your gender – you can have a fantastic successful career working with some of the best and biggest brands in the world, and be rewarded not only financially but you also get to do some amazing things along the way.”

Having worked in the automotive industry for almost 30 years, Daksh has had a number of different roles ranging from washing cars on a Saturday whilst studying at Oxford Brookes University to sales executive and sales manager to then general manager, all by the time he reached 25 years of age. He then became a franchise director at Inchcape at 30 and CEO of Marshall at 37.

Daksh confirms as an organisation they are doing a considerable amount in terms of working towards our shared goal of having at least 30% of women in leadership positions by 2030. Marshall’s have made great strides towards this with over 24% of their management positions in their like-for-like businesses filled by women. This is up from 15% in 2015.

Focusing on people development as a whole, they are celebrating both male and female success stories across the business, they are acknowledging the loyalty of their long servers and have a future leaders programme which is designed to develop the next generation of leaders. In addition to the Automotive 30% Club, Daksh is also involved with a number of organisations which demonstrate they are fully supportive of promoting diversity and inclusion.

Of these actions, the biggest impact Marshall’s have seen is the way they have brought new recruits into the business. Daksh accepts there has been a barrier to entry, particularly for women, and that has been the concept of a low basic and straight commission. A number of years ago they removed that barrier by guaranteeing a £25,000 basic to new sales executives in the first year of joining, as well as paying a loyalty bonus, a residential training course and ongoing training and development. As a result of removing this barrier, they have seen a significant uptake in the number of female sales executives in the business and this has grown almost three-fold. Daksh is also very proud to confirm Marshall’s have five women on their plc and operating boards.

Daksh has huge admiration for successful female CEOs across the industry, particularly on a global and national level. He also has a huge amount of admiration for all women working in, what is still, a male-dominated industry. He is particularly impressed with the tenacity that so many of the Marshall female managers have. He comments: “They really inspire me because I can relate to how they probably feel at times. If I look at my own career, I would hate to think the only reason I was successful is because I come from an ethnic background and that is why I was given an opportunity particularly as I was perceived to be young at the time. If you are good enough you should be given the opportunity irrespective of who you are and what your background is.”